With the carriers routes being central to the project’s objectives, and enthusiastic walkers, horse riders and cyclists amongst the project’s volunteers, the creation of some self-guided trails was always likely to be a popular activity. Three walks and a cycle route have been produced, created by people with knowledge of the areas covered. We also sponsored the local Endurance GB horse pleasure ride. 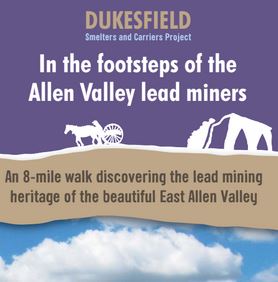 ‘In the footsteps of the Allen Valley lead miners’ is an eight or four mile walk starting high in the North Pennines near Allenheads. The walk takes you past Swinhope Chapel where striking lead miners met in 1849; along the ‘Black Way’ where pack ponies carried lead ore to the smelt mills; past the ‘gunpowder house’ of Sipton Lead mine and ends going past what was once a cock fighting pit. The route was devised by local walks leader Jennifer Norderhaug who said, ‘It’s been a pleasure to work with the team on this project. The past lives on in this area, there is a story to tell around every corner.’

‘Dukesfield Arches and Devil’s Water’ starts lower down near the Dukesfield Smelt Mill and features a six or four mile walk. The walk follows what was the main lead ore carriers’ route from Allendale to Dukesfield before dipping down to the intriguingly named Devil’s Water. The Dukesfield walk was researched and devised by local historian Richard Young who has recently published ‘The ’15 Walks’ a guidebook of routes following in the footsteps of the 1715 Northumbrian Jacobite Rising. Richard said, ‘For many years the ivy covered remains of the Dukesfield Arches were looked upon as something of a curiosity. Now that their true significance has been uncovered it is time to take a fresh look at this area of Devils Water and the complex water management system and network of tracks that made the Dukesfield mill such an important site in Britain’s early industrial history.’

The leaflets can be downloaded from here. They will hopefully encourage more people to get out and explore our beautiful and fascinating surroundings and enjoy the benefits of some fresh air.

Down at Blaydon project volunteers Susan and David Lynn and Hilary and Colin Clark, also members of the Winlaton Local History Society, planned a short walk around sites important to the lost lead industry and which highlights the great contrasts between town and country in a small area. This leaflet will be published soon.

The Cycle route exploires the routes the carriers took between Dukesfield smelt mill and the staithes at Blaydon. It will be published soon.

The Endurance GB Northumberland and Tyneside horse riders rode the routes over Hexhamshire and Allendale common in August 2014. 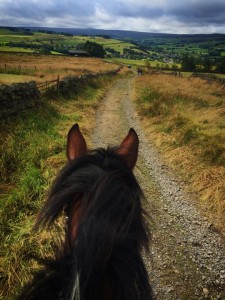 Many of the bridleways crossing the fells that were ridden during this event were established by the carriers and their ponies working in the lead industry.

These routes were important to the industrial revolution in the north east from the 17th century. Lead ore was mined in the high Pennine dales and carried many miles over the moors to the riverside furnace where it was smelted down into lead pieces or pigs. The lead pigs, usually eight stone in weight (approx. 50kg), were then carried to the markets, factories and wharves on Tyneside. This transport relied mainly upon hardy Galloway ponies carrying around 100kg of ore in sacks slung over their backs on panniers, or pulling two-wheeled carts holding ten lead pigs. It was 14 miles by the fell tracks from the mines at Coalcleugh to the great mill at Dukesfield, between Whitley Chapel and Slaley on the Devil’s Water burn. It was possibly the largest in Europe in the 1700s, and at the industry’s peak in the early 1800s we think that at least 2,500 ponies were at work carrying ore, lead and supplies for the mills and mines. 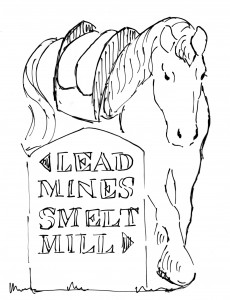 were built at this time, each one home to a carrier’s family, their farm animals and their ponies. On a summer’s day on the busiest routes, a string of ten horses might have passed by every 20 minutes or so. Today you can enjoy the views as you ride over the tops sometimes without another soul in sight, a far cry from the busy industrial traffic of 200 years ago.

We’re also producing a map of the Lead Industry sites associated with the North Pennines which you can visit today.