Little was known about the origins and development of the Dukesfield smelting mill when we started the project but local historians Liz Sobell and Greg Finch were aware of the existence of a great deal of potentially useful material in the Allendale Estate papers at the Northumberland Archives in Woodhorn. A recently completed Hexham Local History Society transcription project showed what was possible. This had involved obtaining copies of 180 18th century letters from York, a small team of volunteer transcribers (some of whom were new to working with archive material) led by Greg, and a shared online system to distribute document images and collect in transcripts, ending in publication.

The principles of the Hexham LHS project were then applied in 2012 to some Dukesfield related documents during our project’s development stage. The Allendale Estate gave us permission to photograph the contents of the letter books kept by their ancestors’ Chief Agents or Stewards from the 1750s, a treasure trove of information on Dukesfield, the lead business, land management, commercial life in Newcastle and much else besides. The volume contained in these letter books alone was massive compared to the previous project and as we kept looking more and more turned up. It was clear to Greg that a different approach would be needed – thousands of high resolution document images could not be managed directly online, and more than half a dozen volunteers would be needed, so the process still had to be kept simple somehow. The approach taken was to load images onto CDs and distribute them to volunteers, and keep a manual record of who had what.

The online document sharing tool Dropbox was used to hold reference material and ‘how to’ guides for volunteers, and as a place to which transcripts could be posted and stored. It worked well enough with 8 or 9 volunteers, some of them veterans from the Hexham LHS project – Jennifer Britton, Susanne and Chris Ellingham, Ian Hancock, Greg and Liz- for us to decide to include this as an activity within our main project plan. An ambitious target was set for ‘Reading the Past’, as we named it – to have 14 or 15 volunteers go through as many letters as possible, and do 230 days of work over 18 months.

In the autumn of 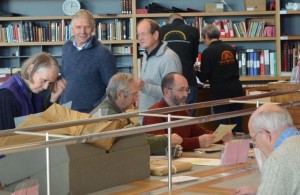 2013 we held open meetings in Hexham and Blaydon to set out our plans and recruit more volunteers. These attracted nearly 30 people, most of whom had little or no prior experience of working with archives, and our pilot phase volunteers. Others joined in at various points over the following year. We held some training sessions in reading 17th and 18th century handwriting, how to use dropbox, our reference material and transcription templates.

We visited Northumberland Archives and Tyne and Wear Archives to learn about handling old documents and looking at material relevant to Dukesfield, the lead industry and the Blackett and Beaumont family. All the time more documents were found, then photographed, or provided to us on paper. Tracking down 2 letter books from the 1670s kept Newcastle merchant Michael Blackett in Cambridge University Library was a real find, the first of which was swiftly photographed by Ian Forbes. So too was the discovery by Lord Allendale and his son of previously unseen documents of the period, freely made available to us. There was no danger of having insufficient material for our transcribers to work on!

Our use of Dropbox and distribution of paper copies or CDs of images meant our volunteers could work where, when and how often they wished, and this flexibility had been one of the keys to success of the earlier Hexham LHS project. At the same time it can be very solitary, despite email and phone contact. To counteract this we organised regular informal meetings for the group to get together to ask questions, share interesting findings and discuss the history revealed.

The team was drawn from along the length of the lead route – from Allendale and Weardale, through Hexham and ‘the Shire’, along the Tyne Valley and down to Tyneside- so we varied our locations, which meant everyone could get a feeling for the whole territory over which the smelters and carriers operated. These sessions soon evolved to include a site visit. After meeting at Stocksfield we were invited by the present owner to take a look around his garden, once the lead and mine supplies depot at ‘Leadhills’, halfway between Dukesfield and Blaydon.

One of our volunteers, Susan Lynn, took us on a walk along the riverfront at Blaydon after a session in the Library there. We saw Mrs Beaumont’s recently restored grand ballroom at Hexham Abbey. A meeting at the lovely little High Forest Community Centre in remote Sinderhope was followed by a fascinating guided walk around Allenheads by Ian Forbes. Greg led a tour around Bywell Hall, full of portraits of the Beaumont family, allowing faces to be put to the names so frequently occurring in the documents. After meeting in Whitley Chapel we went to see the progress of the mill excavations at Dukesfield. An expedition to Bretton, near Wakefield, took place in April 2015, where we were shown around the magnificent grounds of the Beaumonts’ Yorkshire home by volunteers at the Yorkshire Sculpture Park (which is well worth a visit in its own right).

Training events at Northumberland Archives at Woodhorn, and at Tyne & Wear Archives at Newcastle’s Discovery Museum 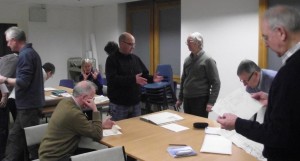 Through the dedication, skill and enthusiasm of 30 volunteers, an astonishing amount has been achieved. Veterans of the Hexham LHS and pilot projects have stayed with us and complete novices have become skilled at reading 17th and 18th century handwriting. Some have written up their findings as short articles for the project and Hexham LHS newsletters, with more to follow, and many of the stories revealed have given input and inspiration to local history talks and the project’s community play. 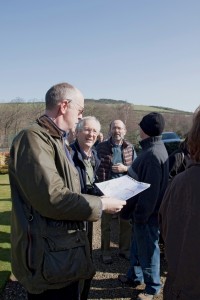 We thought 230 days of work was an ambitious target but at least 700 days were contributed during the formal project period, up to the end of June 2015. The end product is that nearly 7,000 letters, reports, witness depositions, wills, inventories, financial accounts and other items were transcribed, held in nearly 100 collections in 12 different archives or record offices. It created an archive of well over a million words of fully searchable content by June 2015.

It was clear from the outset that the volume of material was far more than we could ever hope to publish on paper, so thoughts turned to how to make it available online through the Dukesfield website. This gave us new options for presenting the material. Crucially we were no longer bound to the sequence of how letters appeared within each individual volume or collection (although we decided to provide these too, reflecting the integrity of the original source material). But by breaking larger collections into individual dated items within a searchable online database we could bring back together sequences of letters between people, the originals of which have long since been separated into different collections, often in different record offices altogether. This approach was defined and set up with our website designer Peter Davies of Digital Acorn in Hexham. The project volunteers have also contributed biographies of the main correspondents and other supporting material to the website to support future researchers. 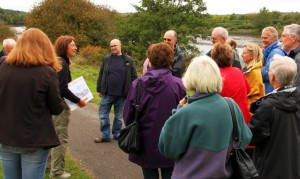 The website has been set up so that additional documents can be added to the collection. And we expect to do this, for the group plans to stay together, to continue meeting informally once the Dukesfield Smelters and Carriers project concludes, and to help moderate comments that come in from future users of this new research resource. It has been a great learning experience, has provided a lot of enjoyment along the way too, and new friendships have developed. And it’s not over yet! The group decided to stay together and carry on the work, which it is now doing aided by a follow-on grant from the Hexham Local History Society, taking the number of documents to over 8,000 by the time of the fifth anniversary in 2017.

It’s not just old documents. There have been project outings to the Dukesfield excavations, Leadhills, once an important staging post on the lead road, at end of the lead road at Blaydon, Bretton 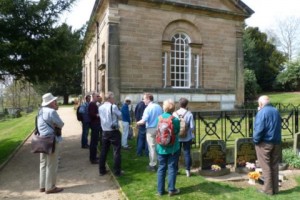 and Newby in Yorkshire, and to Newhouse in Weardale. Photos by Gordon Carlton, Chris Britton and Yvonne Purdy

Jennifer: “I’ve been delighted to be part of this project having learnt so much about transcribing, old language, the lead mining industry and the mine owning families. It has also given the opportunity to make new friends, develop a new hobby and visit interesting places. Thank you so much”

James & Liz: “We got involved because we have been interested in Industrial archaeology for some time & this would extend our knowledge. We heard about it initially from friends in Slaley & then when Greg spoke at Stocksfield LHS. We now have a much deeper understanding of how the lead industry worked. The enormous amount of cash to be raised for the annual big pay! How the price of lead collapsed at the end of 1806 due to a trade ban with Europe. How good the postal service was and fascinating little insights like “let it be known in Weardale that Mr Beaumont supports certain candidates at the election”!

Jane: “I joined the pilot project in 2012 – attracted by the idea of getting involved in & learning more about the social history of the North Pennines and its lead industry. Living in Allendale, I could not but be interested in the lead industry and the impact it has had on my surroundings. Transcription of the letters has been very enjoyable and the best bits for me have been the glimpses of everyday life amongst the business letters that you do not encounter in the history books. And then there have been the meetings and talks which have put what I have transcribed into a much broader context.”

Christine: “as soon as I heard Greg talk about the project at a meeting I wanted to know more. It has opened my eyes to the rich industrial heritage of my chosen home region and made me even more glad that I chose it. The bits I enjoyed most were the details of the ordinary people and the skulduggery of the lead workers. It inspired me to join the Hexham Local History Society and I look forward to having more time to learn more in the future.”

Michael: “I was born in Greenside, quite literally within a stones-throw of the Lead Road. For all my 65 years I have never lived much more than a mile away from it….The project gave me the opportunity to transcribe witness statements from a court case concerning that very stretch of the Lead Road. Learning how to decipher archaic handwriting I found myself peeking into the intriguing world of 1690. These were the actual words of people who lived in my neighbourhood in the reign of William and Mary, travelling up and down this busy little lane. What a fascinating journey I’ve been on – and it ain’t over yet! It’s been a wonderful experience.”

A summary of the project and the resulting archive was published in 2016: G. Finch,’Dukesfield Documents: a new North East history online research archive’, The Local Historian, Vol 46, No.2, (2016) 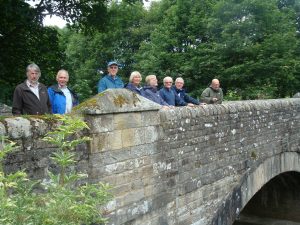 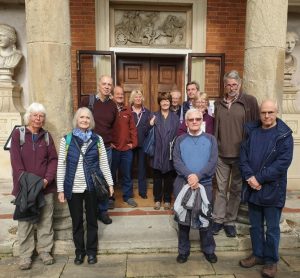